The Great Basin LCC hosts an annual webinar series to showcase some of the latest research from our supported projects and other initiatives in the Great Basin. We also collaborate with other LCCs and partners to present webinars on relevant and pressing topics in our region.

See details for the:

The Great Basin LCC annual webinar series provides an opportunity for land managers and scientists working in the Great Basin to discuss their latest research and how to incorporate the research into on-the-ground efforts. Each webinar includes a 30 minute overview of a project, followed by a discussion of how the work can be applied and possible collaborations. 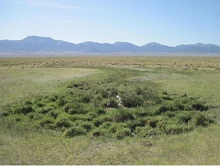 Cheatgrass (Bromus tectorum) and medusahead (Taeniatherum caput-medusae) invasions pose a serious threat to Great Basin ecosystems. Managers and scientists are hopeful that strains of the bacterium Pseudomonas fluorescens that have been selected for their weed-suppressive properties in laboratory, greenhouse and wheat field trials will also be able to selectively inhibit root growth of annual weeds in more complex rangeland ecosystems. These weed-suppressive bacteria (WSB) are now commercially available in many states and have been applied on tens of thousands of acres across the Great Basin, yet results are variable and largely unpublished, indicating that much remains to be understood about when, where and why WSB are or are not effective. In this one hour "lightning session" webinar, six speakers provided an overview of the promise and uncertainty surrounding WSB use in Great Basin rangelands and the efforts currently underway to better characterize WSB effectiveness.

Effects of grazing on sage-grouse and other shrub-steppe birds: A collaborative project to inform management of sage-steppe rangelands - September 13 at 10:00 AM (PDT)

Greater Sage-grouse have declined since the mid-1960s, and grazing is the most extensive land use within sage-grouse habitat.  The speakers presented progress on a 10-year project designed to document the effects of cattle grazing on:  1) demographic traits of Greater Sage-grouse; 2) sage-grouse habitat characteristics, 3) insect abundance, which is important prey for sage-grouse chicks, and 4) abundance of all other bird species. The research team works at five study sites in Idaho where they randomly assign BLM pastures to one of four grazing treatments that include spring-only grazing, spring and fall grazing, and no grazing.

Decisions regarding the allocation of scarce resources are integral to the management of imperiled species. Managers need to determine what restoration activities will have the most benefit, where reintroductions are most feasible, and when to cease interventions in locations where persistence is highly unlikely. For many imperiled taxa, these kinds of decisions are made without the benefit of the most essential information: quantitative estimates of population viability. The goal of this project is to improve decision making for imperiled species by developing and applying novel methods of population viability analysis (PVA) that use all available field data and can be applied even for populations with limited information.  The speakers discussed current collaborative efforts to apply the method to Lahontan cutthroat trout conservation planning and upcoming plans for Bonneville cutthroat trout and desert redband trout.

Relations among cheatgrass-driven fire, climate and sensitive-status birds across the Great Basin - October 11 at 10:00 AM (PDT) 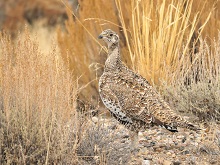 As the distribution and abundance of non-native cheatgrass (Bromus tectorum) in the Great Basin has increased, the extent and frequency of fire in the region has increased by as much as 200%. These changes in fire regimes are associated with loss of the sagebrush (Artemisia tridentata) and native grasses and forbs in which many native animals, including Greater Sage-grouse (Centrocercus urophasianus), breed and feed. Managers have suggested changes in fire regimes, fuels treatments and post-fire restoration with the intent of increasing the probability of Greater Sage-grouse persistence. However, researchers have rarely assessed the potential responses of other sensitive-status birds to these interventions rigorously. This project is collecting and analyzing data on the effects of cheatgrass on current and future fire regimes, and the effects of fire regimes and vegetation treatments on multiple sensitive-status species. Project inferences have considerable potential to inform decisions about management of both ecological processes and species.

Calculating the water balance for the southwest under current and future climates - October 19 at 2:30 PM (PST)

Ongoing changes in climate are influencing the water resources of California and the Great Basin. Projections of future climate scenarios are essential for assessing associated biological, physical and socioeconomic impacts. The researchers in this project used the U.S. Geological Survey's Basin Characterization Model (BCM) to integrate coarse climate projections with fine-scale locality data to translate generated fine-scale maps of projected climate trends into hydrologic consequences. The BCM thus facilitates the evaluation of hydrologic response to climate change at regional, watershed and landscape scales. This type of downscaled hydro-climatic data is essential for assessing the vulnerability of water supplies, forested and agricultural lands, biodiversity, and human health and safety.

Assessment of the effects of non-native ungulate grazing on Greater Sage-grouse and their habitats  - November 1 at 1:00 PM (PST)

This project uses management-related variation in grazing by both feral horses and livestock as well as five years of field work to assess how both Greater Sage-grouse and the habitats on which they depend might be influenced by grazing.  The research team monitored radio-tagged sage-grouse and vegetation on Hart Mountain and Sheldon National Wildlife Refuges as well as lands managed by the Bureau of Land Management (BLM) south and west of Sheldon from 2013-2016. The team also worked on the latter two units in 2017. These units provide historical and current variation in grazing management: livestock were removed from Hart Mountain and Sheldon in the early 1990s; feral horses subsequently invaded Sheldon during the 2000s; additionally, BLM lands include both Horse Management Areas and grazing allotments, while the U.S. Fish and Wildlife Service (USFWS) removed virtually all horses from Sheldon in the falls of 2014 and 2015.  The team used distance sampling of horse and cow feces to estimate horse and cow use days on Sheldon and BLM land each year, and supplemented these data with data from grazing allotments and a regional horse survey conducted by USFWS to build spatial models of horse and cow use throughout the study area.  They then used predicted horse and cow use, along with other environmental variables, to assess impacts on sage-grouse demographics and their habitats.

Fuel control treatments in the sagebrush steppe: Recognizing and dealing with climate-related differences among sites - November 29 at 10:00 AM (PST)

In this webinar, Dr. Bruce Roundy of Brigham Young University will discuss climatic conditions that favor cheatgrass and those that favor desirable perennial herbs. He will explain why conditions that favor cheatgrass are associated with less resistance and those that favor perennial herbs are associated with more resilience. The presentation will suggest ways to increase resistance to weeds and system resilience when planning fuel control treatments in sagebrush steppe.

One of the challenges facing public land managers in the Great Basin is identifying adaptation strategies to increase resiliency to climate change in an area that is already struggling with profound environmental challenges. Recent efforts to understand how the Great Basin weathered past droughts and climate variability may offer insight into approaches that could work in future decades. One approach to gather this information is to understand Traditional Knowledge. Gathering this information is challenging and requires an acknowledgment that much of this information is highly sensitive and proprietary. Translating this information into actionable management plans is even more challenging. This project attempts to use an approach that protects the confidentiality of the data and meets the needs of both the tribal community and natural resource managers. This pilot project uses a method of naïve interviewing with tribal youths to gather narrative “micro stories” from elders and key tribal members and then answering a series of carefully constructed questions that allow participants to apply context and meaning to their stories. This approach has several advantages including that it uses tribal members to gather the data and provides a link between the generations to raise awareness about environmental concerns and Traditional Knowledge. This presentation focuses on the challenges of working with culturally sensitive information and using Traditional Knowledge with western science in natural resource management and provides recommendations for using this approach in the future.

Looking for information on previous webinars?